Updates to Kathleen's profile since your last visit are highlighted in yellow. 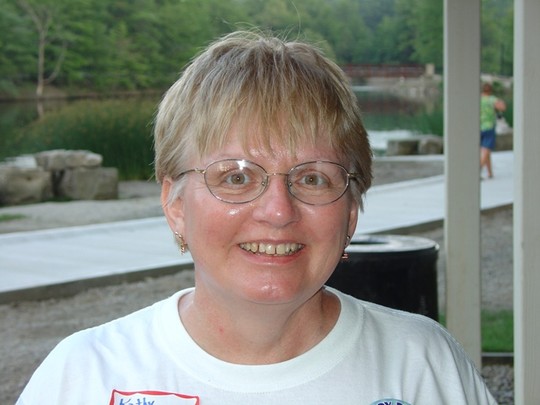 My family moved to Berea in 1958 after living in Michigan, Texas and California. I attended Riveredge School for 5th and 6th grades. After high school, I decided that the name "Kathy" didn't really fit my personality and I returned to my family nickname of "Cass."
I married Karl Beckman (Fairview High School, 1967) in 1972 and we have resided in Berea ever since. Our son, Sean (BHS, 1987), lives in Berea.
My husband is a systems engineer (Cleveland State, 1972) for Motorola, Inc. He will be retiring soon.
Our son (University of Akron, 1995) is a quality assurance engineer at NASA Glenn Research Center in Cleveland. After many years working on government contracts with NASA, Boeing and the Department of Defense, he has finally been hired on at NASA as a civil servant. This means job stability -- hurrah!
I attended Cuyahoga Community College as a part time non-traditional student. I graduated magna cum laude with an Associates of Arts degree in General Studies in 1992.
I am currently a haus frau but that doesn't mean I don't work--I just don't receive a paycheck for all that I do. I have been an active volunteer with many organizations over the years, including the United Methodist Church of Berea, Boy Scouts, PTA (Ohio State PTA Life Member), Tri-C Environmental Action Group and the Berea Arts Fest. From 1995 to 2014, I was a community volunteer for the Music Patron Drive at Roehm Middle School and then at Middleburg Heights Junior High School (the old Midpark building) when Roehm was closed.
My husband and son are both musicians, so I spend a lot of time as a groupie (sometimes roadie) at concerts ranging from classical to rock and roll.
We enjoy traveling with recent trips to Ireland; Cancun and Puerto Vallarta, Mexico; Punta Cana, Dominican Republic; South Dakota; Colonial Williamsburg, Cape Cod and Seattle. We have visited my cousin, Keith Lay (see his profile) in Dallas, Georgia.
My latest "proud parent" moment. On November 14, 2008, the Combustion Integrated Rack that our son worked on as a systems engineer, was launched on STS 126 Space Shuttle Endeavor. He was able to watch the launch from the Vehicle Assembly Building at Cape Kennedy. I have YouTube video links for anyone interested in the launch or the installation of CIR in the Destiny (USA) lab of the International Space Station.
"Lately, it occurs to me...
What a long, strange trip it's been."

Our son, Sean, at the age of 51 married a wonderful women, Tammy Willet, on October 10, 2020. We now have 2 grandchildren who are attending Berea Midpark High School.